Zooty and Rebo are 15 years old now and are starting to show some wear and tear. Rebo is recently on blood pressure medication (older kidney problems led to high blood pressure which led to thickening of the heart wall which lead to a heart murmur); Zooty is hyperthyrodial.

Kidney and thyroid problems are common in housecats. You know when you see your vet and they ask you questions about whether your cat's behavior has changed recently? If it has, that can be a symptom of thyroid problems. Hyperthyroidism cranks up the cat's metabolism and can lead to things like 3AM yowling, vomiting and general hyperactivity.

It's most commonly caused by benign tumors on the thyroid gland. Less commonly the tumors may be malignant, but we're hoping that in Zooty's case they'll be garden variety benign.

It turns out that thyroid tumors are one of the few kinds of cancer which can be treated easily. Thyroid tissue absorbs iodine, which makes it very easy to target. The common treatment is to inject cats with a radioactive isotope of iodine, I-131, which, as it's taken up by the thyroid tumors kills them. It's a very neat (as in, not messy) treatment, normally with few side effects. And statistically, cats that go through I-131 treatment have been mortality than cats that are left untreated or cats that use medication to control their thyroid levels.

The interesting thing is that at the end of the week (assuming all goes well) we will be taking delivery of a radioactive cat. He'll need to be isolated from his non-radioactive brother for two weeks. And his radioactive waste will need to be stored for about three months until it cools down to the point where it can go into landfill.

From what I've read, treatment is usually harder on cats' owners than the cats themselves. The clinic that's treating Zooty offers online webcams, so we can take a peak during the next few days. 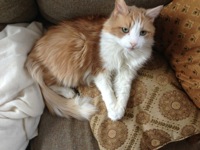 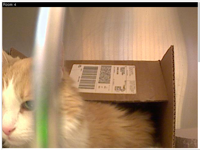 The first photo is pre-I-131 Zooty… the second is radioactive Internet cat!