When Apple first introduced the MagSafe power adapter connector it felt like a big step forward in an area no other company was making improvements in. MagSafe used magnetism to couple the power adapter connector to the notebook. Other manufacturers still used mechanical couplings, which were prone to crashing your notebook to the floor if you or your pet or your Roomba managed to get snagged in the power cord. With MagSafe the cord would easily detach from the computer. Otherwise it stayed firmly in place.

A few years later, enter MagSafe 2 - a slimmer version of MagSafe, which would allow Apple to build thinner devices.

Slimmer - and inexplicably much, much weaker. So weak that a cat brushing against the power cord would knock it out. Or a stiff breeze or withering glance.

What was a great experience became a miserable one.

Thankfully, a Kickstarter project came along to fix what Apple would not. This was one of the easiest, fastest, most satisfying Kickstarter projects I've helped fund. The project was funded on August 2nd and I had my Snuglets before the end of September.

And man do they ever work. A small metal adapter that fits in the MagSafe 2 port on the computer, the Snuglet is a much stronger magnet. My power connection can now survive the cat nuzzling it or my leg brushing against it.

If you missed the Kickstarter project, Snuglets are now available via their own web site. They come two to an order, for $19. They're one of the best Mac-related investments I've ever made. 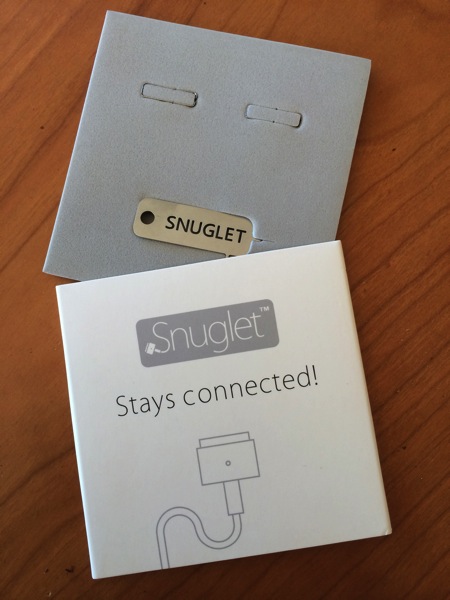