I ran through most of my month's data allotment in a few hours yesterday afternoon (you can do this at LTE speeds). It was mere minutes between a warning from Verizon that I was 75% of the way through my data plan till another warning that I had hit 90%.

I didn't worry much about the 75% warning, despite the fact that the current period had started only a few days before, but as soon as I saw the 90% warning I threw my phone into Airplane Mode and tried to figure out what was going on.

There are two places in iOS 7's settings where you can tell it not to download music over cellular data.

The first is in the iTunes & App Store settings: 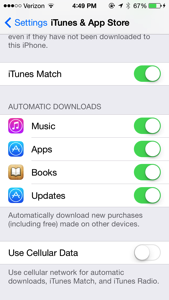 I had turned this off. Pretty clear that my phone shouldn't use cellular data for iTunes Match, right? But no, it was still downloading music over LTE. Turns out there's a second setting, in the Cellular section of the Settings app. Under iOS 7 these settings allow you to see how much cellular data each app has used and to disable cellular access for each app. The Music app had alarmingly used 3.3GB of cellular data. 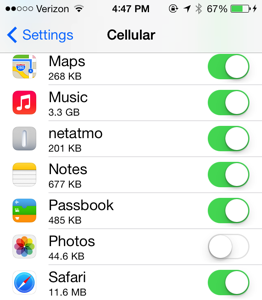 You want to make sure that you have the Music app disabled in Cellular Settings, or else iTunes Match downloads can easily chew up your data plan.

Here's how to reproduce the problem:

1. You must have an iTunes Match subscription

2. Be on a wifi network with wifi enabled

4.Turn on Show All Music under Settings | Music. Then find an album you that iTunes Match hasn't already downloaded and start downloading it.

5. Turn off wifi. The album will continue downloading over cellular unless you turn off Music under Settings | Cellular despite the fact that you have Use Cellular Data turned off.

Swapping these two options - leaving Use Cellular Data on but turning off Music under Settings | Cellular - and then starting a download over wifi and disabling wifi - produces the result you would expect - a series of warnings that the music can't be downloaded.

I can think of some ways the software might work where this would be the intended behavior, but if that's the case then he Use Cellular Data switch is grossly mislabeled. The upshot of this is that if you use iTunes Match and care at all about how much cellular data you use then you should be careful to turn off Music under the Cellular Settings.