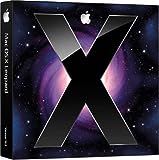 MacOS X Leopard has been out for a while, but there are still a lot of folks who haven’t upgraded to it.

The upgrade comes in two versions, the single user licensed one and the “family pack”.

If you’re coming to it from the Windows world, you’ll find that Mac OS X Leopard is a pleasure to install. It requires no serial numbers or product activation. You won’t have to worry about matching the particular distribution to the particular CD key.

You should be forewarned that, in my experience, the restore DVD that comes with a computer will only work with that computer or class of computers. So if you have a MacBook restore DVD it likely will refuse to install on an iMac.